I’m fairly certain that wayward man of Erykah Badu’s acclaimed Call Tyrone fame, was a fauxtep. He had good dick, or perhaps his penis had been magnetized by Ms. Medulla Oblongata’s benevolent pussy, but otherwise, he won’t shit. This cataclysm of thought led me to explore in more depth the trajectory of hoteps, or as I like to call them, “fauxteps”. I researched these scheisters and their ridiculous, God-forsaken pathologies online, (and in real life, because: 1) ya girl came to win and 2) yes, they do have good dick). What follows are my conclusions. When you love people, you try to warn them. I’m here to help, so ladies, please use this to your advantage.

Go forth and prosper.

1 :a Black man whose rallying cry alludes to lessening the plight of Black people, but this “progressive” stance normally excludes Black women, their plight, thoughts and issues. Said male is actually all about Black male power.

2 :a Black man who pretends to like women, but really only likes fucking them.

3 :those men in your inbox talmbout, “Peace Queen”. They refer to Black women as queens in one breath, and “bitches” in the next.

4 :misogynistic assholes. the straight ones are normally also homo- and transphobic. 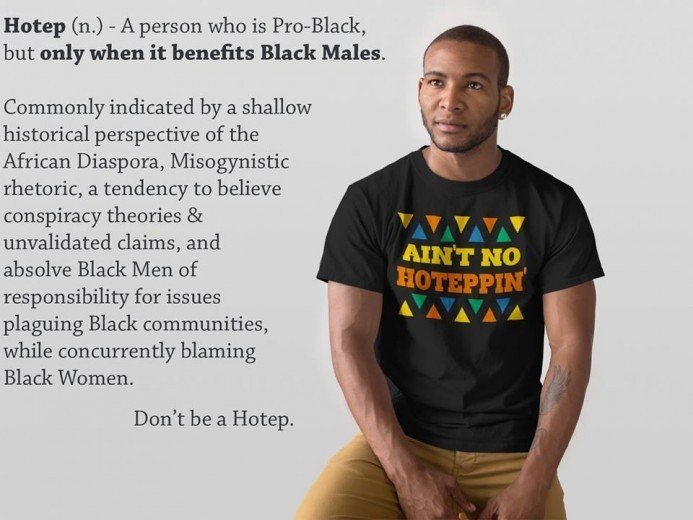 5 :men who claim to represent the beginnings of Africa and ancestral religions, but really only represent the interest of themselves.


Examples of FAUXTEP in a sentence:

Fauxteps are duplicitous, often talking out of both sides of their mouths.

Origin and Etymology of fauxtep:

Derived from the Egyptian word that roughly translates as “to be at peace”. It is regularly found in the names of ancient Egyptian figures such as Hotepsekhemwy (ḥr ḥtp-sḫm.wj “the two powers are at peace”), the first ruler of Egypt’s Second Dynasty.