the trouble with standing for kaep while caping for floyd

I logged into Facebook after this weekend’s heavily publicized fight to see that people were apparently (incorrectly) equating Floyd Mayweather’s “victory” over Conor McGregor to Black excellence.

You sound stupid. Black excellence encapsulates many things, but let me brief you on what it absolutely does not. Black excellence is not honoring a Black male misogynist–Mayweather–who “triumphs” in his professional life, but subjects Black women to trauma via domestic terrorism in his personal life. This includes, but is not limited to, physical abuse, verbal threats and humiliation on social media platforms when the women who are or have been involved with him don’t behave in the manner that he expects them to.

If you’re attributing this ingrate’s win over a well-paid racist troll–Conor McGregor–to Black excellence, you need a semester-long class on ACTUAL Black excellence. To even be fully capable of conjuring anything akin to this melanin magic, you can never exclude Black women in the form of discarding our trauma at the hands of your brothers. Attaining Black excellence means actually listening to Black women, honoring us, believing us. It means protecting us by any means necessary, even when you must forego defending your wayward brethren to shield us. Not simply when it’s advantageous for you. 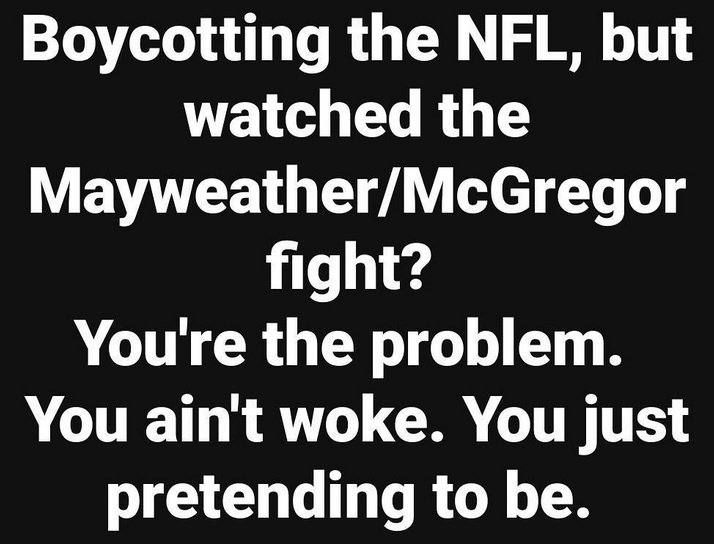 You can’t sit with us or stand with Colin Kaepernick if you support Floyd Mayweather. Ever. These two things cannot coexist. They are neither congruent nor adjacent. There are no parallels. Caping for Kaep if you’re remotely invested in the exultation of a mongrel–who is extensively renowned for beating women and his pathology degrading us as objects–is a misstep at the very least. Willfully stupid at most.

None of y’all fools stopped supporting him after that illiterate-ass rant, either.

I literally direct everyone to this article every. single. time. Floyd Mayweather is about to enter the ring for the world to see. Because a LOT of you seem overcome with convenient amnesia each time ya boy starts talking trash, hyping himself up for his next pay day.

But never forget, you are supporting and enabling a savage who has threatened to kill Black women.

And for all of you saying, Floyd paid his debt to society, lies. Code Red Flag founder, Dena Reid, said, “Nah. He made a down payment.”

Some believe this is apples and oranges, but it’s far from it. Not all achievements for Black men are achievements for the “Black community”. And Floyd ain’t no s— to be proud of “for the culture”. He’s TRASH. And I’m sideeying the f— out of you if you f— with him. Holding someone accountable for their words, actions and who they align themselves with is a sincere form of love, and I will hold you accountable, gahtdamnit.

THIS, here, is about Black men lionizing Floyd Mayweather’s “prosperity” and capitalistic endeavors, while disregarding and diminishing the fact that he oppresses, bullies and inflicts trauma upon Black women. The same folks ignoring this will go back to standing with Kaep tomorrow, ignoring your own damn hypocrisy in the process. And that’s a huge FAIL. This gleeful shortsightedness blinding Black men will do nothing more than further contribute to their detriment and demise.

Misogynoir at its finest, if I do say so myself.