the legacy of john lewis

I heard the news of Representative John Lewis’s transition late last night less than 20 minutes after the story broke. I was shattered and went into meltdown mode, sobbing and eventually lighting a candle for the safe, joyous, peaceful and liberating journey of a new ancestor. I have loved and admired John Lewis forever. In a culture of cancel, this man could do no wrong. His quiet strength moved me. 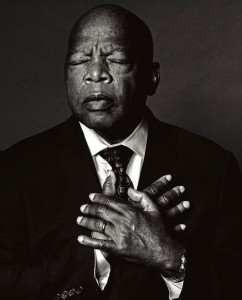 I’m sad that he died during a time like this. A time that feels like a Civil Rights movement redux.

Though I’m disheartened by his passing, one of my best friends put it in greater perspective for me. She helped me remember how people who engaged in the type of work that John Lewis did, during the era that he did, frequently didn’t make it to the age that he was.

They are, indeed, often martyred before their time. I’m so glad we got to keep Rep. Lewis for as long as we did.

As I remember, reflect and grieve, to Mr. Lewis I say, job well done, sir.

You will be missed. You are an American Hero whose legacy will be etched indelibly in our hearts and minds forever.