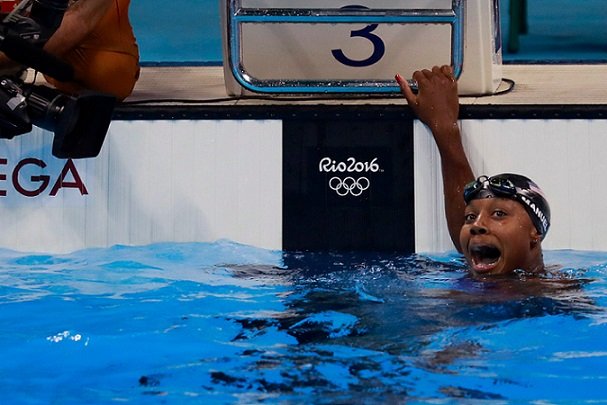 Today, I’ve come across commentary on the internet inquiring why the media has to bring race into Simone Manuel’s momentous achievement. She is the first Black woman to win a gold medal in an Olympic swimming competition (the women’s 100m freestyle) for the United States, or any individual medal in the sport for the US.

But the history of submerging ourselves in water is a sordid one.

Imagine a day like today. A sweltering, hot summer day. The temperature outside is 93°, but feels like it’s well over 100°. The humidity is suffocating, and will smother you if you don’t make your way to a slightly gelid location soon.

You’d like to cool off at the “community” pool, but you can’t.

Therefore, excluded from being human in that way. You’re excised of this right. Not because Mama said no, not because you broke the rules the last time you visited the local swimming hole, ONLY because you’re Black. You were born with melanin, and that makes it unlawful for you to join white folks for a dip, if only to cool off your lithe brown body for a few minutes.

To our detriment, we were banned from public and private pools lifetimes ago.

These barriers were often responsible for Black children finding other places to swim–more dangerous places that would lead to drownings…because after all, where could they learn to swim, and who would teach them?

White Americans are twice as likely to know how to swim as Black Americans.

Even before Simone’s victory last night, one that will be etched indelibly in the brains of all who witnessed and shared in her joy, I would often ponder the catalyst that promoted the idea of many Black people not swimming, or not knowing how. It’s not that we didn’t desire to learn. We simply weren’t presented with many or any opportunities to learn. Then fear set in, it seems. Then came the tales of Black women and girls not wanting to get their hair wet. Which is both interesting and ironic because I would happily get in the water as a child, even though I could barely swim, which in layman’s terms translates to, I couldn’t swim. In spite of my mother insisting on my taking swimming lessons when I was around 5 years old, I still can’t swim. I vividly remember my instructor chasing me around the pool at the end of our lesson when we would jump off the highest diving board into the deepest end of the pool together. I presume this act was one of encouragement to be fearless in the face of that intimidating water. I almost drowned when I was 12. Regardless, I always had a ball at the pool and was never scared. I still get in the water now. I can float, if nothing else.

So for those of you scratching your heads, asking yourselves, “What’s the big deal?”… Instead of wondering why many of us don’t know how to swim, question why state, local and national governments stood behind the flagrant protests of white citizens to keep us out of public pools–pools I’m certain those before us were also taxed for, courtesy of the federal government, though prohibited from enjoying them.

I understand that Simone Manuel does not wish to be viewed, known, remembered or immortalized as “Simone the Black swimmer”. But there is a certain unspoken coronation that accompanied that triumphant moment she reached the finish line first yesterday evening and realized she won.

A self-aware and reflective Manuel announced, “This medal is not just for me. It is for some of the African-Americans who have come before me. This medal is for the people who come behind me and get into the sport and hopefully find love and drive to get to this point.”

There’s no denying that Ms. Manuel placed her boot on the neck of some stereotypes last night and hopefully replaced some of the relics of vile racism and intimidation surrounding Black people and water with a memory that is explicably more palatable.

What occurred is not only a significant part of Black history, but American history.

Cheers to all the Black girls across America who will no longer fear getting their hair wet because Simone inspired them to swim. And be great at it.